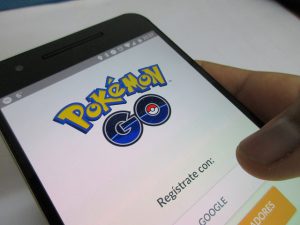 Not quite 6 weeks old, Pokemon GO is one of the most popular mobile games on the market, having been downloaded more than 100,000,000 times. If you’re not familiar with Pokemon GO, you’re not alone. That doesn’t mean you can’t take advantage of the game to do some creative marketing for your small business.
The game appeals to players because it allows them to combine the best functions of their phones and tablets with the game itself. When players start the game, they choose a “team” to join (Red, Blue or Yellow). The team aspect allows players to work together to stake out strategic areas of control.

Rather than hunting Pokemon in a mythical, 2-dimensional land, Pokemon GO allows users to find Pokemon in their own neighborhoods, while promoting physical activity. Players find additional Pokemon and in-game objects just by moving. They can also earn rewards that enhance their game play.

In the game, periodically players need to resupply, and they’re always on the lookout for Pokemon. Resupplying takes place at “Poke-stops”. Team battles take place at “gyms” and the winning team raises their flag over the gym – waiting for players from another team to challenge them for control of the “gym.” Being able to control a gym for 24 hours gives the controlling player additional in-game rewards.

In addition to supporting GPS, location-based activities, team play and augmented reality, the game also supports in-game purchases. That’s great because that gives small business owners a way to participate in (and take advantage of) Pokemon Go for some creative marketing tactics.

The game maker, Niantic, has designated certain real-life places and areas as Poke-stops and gyms. If your business is fortunate enough to be a Poke-stop or a gym, you’re in luck. You don’t need to do much else – other than promote that fact – to attract players. Using social media or another creative marketing venue, you can simply let players know that your business is open for business! (And letting them know that it’s a Poke-stop or gym doesn’t hurt either.)

Don’t forget to offer deals to players from the Team that controls your gym, and publish them using social media. You can also offer physical promotional items with the name of your business on it. Even if they’re just red, yellow or blue pencils, it’s a great opportunity to promote your business.

If your business isn’t already on the map in the Pokemon Go universe, you’re not out of luck. Those in-game purchases? One of them is called a “luring module.” Download the game, purchase Pokecoins and use them to purchase luring modules. The luring modules, which come in 8-packs, are “beacons” that magically lure Pokemon to you (and others around you). Businesses like restaurants and shops that depend on walk-in traffic are setting up lure modules (they last for 30 minutes each), and luring Pokemon, along with Pokemon Go players.

Creative marketing here may include special deals for players, announce who’s in control of your gym, or let them know when you’ve set up a lure module. You can also attract players to your business when you’re on the road. For example, say you operate a food cart. Locate gyms or Poke-stops near where you do business and set up shop there. Set up a luring module during your off-peak periods and watch the customers flood in. You can even offer special deals or combos to attract Pokemon Go players. Not in the food business? Try the same creative marketing approach if you’re at a trade show.

Pokemon GO is a great opportunity to promote your business and encourage foot traffic! If you’d like more information about ways to incorporate social media into your creative marketing plan, please contact our Creative DirectorDave Ramsell or give Dave a call at (330) 243-0651 to set up a consultation.